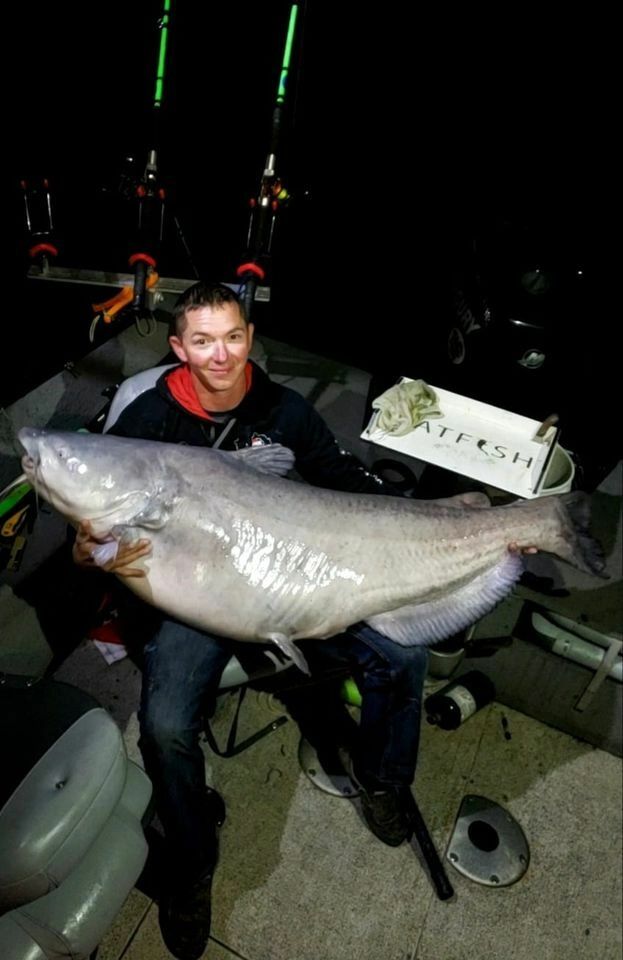 It all started with a phone call at the last minute on Friday evening from my Uncle Chad. Hey, let’s go fishing! Like always without any hesitation I said “YOU KNOW IM DOWN!!!” The water levels were extremely low all around us so we decided to make the trip down to the Mississippi River. I met up with him and Tommy around 10am. From there we wanted to get some fresh Asian carp for bait, which seemed to be the bait of choice this trip. After finding a school and cutting some donuts causing them to jump into the boat we were all setup to get some poles in the water! The action was slow at first until 3 or 4pm, we set up on some barges and bounced some baits under them. After catching some nice fish we decided to work our way back up stream before dark anchoring from spot to spot. From that point on we caught at least 1 fish at every spot until about 10pm when things slowed back down which was fine we had already C.P.R. 200lbs of fish or more! We made one last move for the Night and that is where a dream became reality!

I had just decided to rest my eyes for a little when I heard something that sounded like a guitar string pinging at a high pitch about to snap.  I’m still half asleep as my eyes are starting to open and I’m trying to figure out where I’m at and what’s going on? Once my eyes focused in on my rods I could see one was completely folded over and the pinging of the string slicing through the 5mph Mississippi current. I managed to get to the rod and loosen the drag up a bit, at this time Tommy hears all the commotion and wakes up and asked me if I had a good one on? I was busy trying to wrap my head around what the hell I had on the other end of this line… Maybe my line snagged a floating tree or some type of debris? But then I see the line was running up river as it was still pulling drag. I turned and said, Oh ya it’s a good one. I basically just stood there while this monster stripped line off the reel like he wasn’t even trying. I told him we might have to pull anchor because I’m not moving this fish.. Tommy said, I should wake Chad up! I laughed and said I can get him up and I engaged the bait clicker on my reel, so now you can hear this monster peeling drag nonstop, Chad then sits up wide awake with his eyes all bugged out with that same look I’m sure I had when I saw the pole folded over!

So now were all on deck and hooked up to this Mississippi Monster. I started getting some line back so we weren’t too concerned about pulling anchor anymore, but we did managed to get some rods reeled in and out of the way just in case things got sketchy at the boat.  I basically just kept a tight line on him and played that tug of war game for about 20 mins or more just trying ease the fish in. The line I was using and still use to this day was 30lb Ande Monster Monofilament. With a 8/0 HTT Reaper Hook. Finally we started seeing the boils of the fish rolling and thrashing near the boat as he is still trying to swim up river.

Which honestly was the best thing this fish could have done for me was to go upriver. We get a good look at him with the flash light and everyone just kind of goes silent and Tommy yells IT’S A DINOSAUR! Now were all laughing and carrying on being our normal goofy selves knowing that were about to land it in the net. Finally the opportunity comes and Chad gets him in the net on the first swoop and we all lost our shit to be honest! Chad man handles this beast into the boat as were still losing minds over the magnitude of this fish that we just caught. And so the guessing game begins.

I said well there’s our 90lber guys, and Chads Like there’s nooooo way, even though deep down he is hoping its every bit of 90! Tommy is still calling it a Dinosaur and said its probably over a 100lbs,  I had recently seen a 90lber caught and I had a good feeling that that fish was every bit of 90lbs if not bigger! As Tommy and Chad hoisted the fish up in the net with the 110# Whisker Seeker Scale. I video recorded the scale bouncing between 105 and 106lbs for a solid 15seconds it seemed like before I called it 105.5… Chad then yells 100 POUND CLUB, and we all yelled in celebration!  This has all happened under 60seconds of this fish being out of the water to this point, Now its picture time, Tommy was recording on his phone I sat down and took a few pics and we immediately was ready to release the fish.. I bear hugged this Pig and waddled myself to the only safe place I could think of releasing a fish of this size. Laid him down on deck with its head over the stern and flipped him back into the deep abyss of the mighty Mississippi. Hoping we had done everything right to ensure a healthy release. And I can say we did because he was caught again by Wade Kaminski that following spring. And I know this because this fish now nicknamed Blufasa, Has 2 very unusual scars on its head one being shaped like a heart. He was also fishing that same stretch of river that we pulled him from. I was so happy to see that he was still roaming the waters, hopefully Blufasa will grow up to be the next State Record better yet WORLD RECORD….