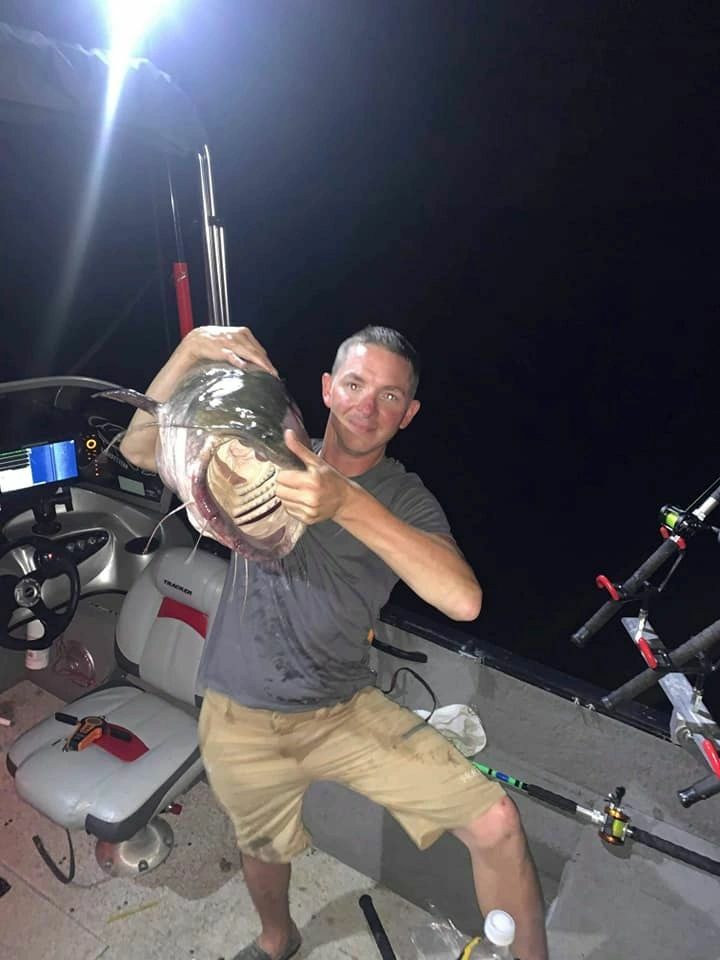 When a snag turns into a MONSTER while drifting! You can’t make this story up!  Short version of how this catch went down. I had just looked at the fish finder and realized there was a lot of structure off on my side of the boat. I told my buddy well i’m about to lose that rig for good and within a min or two I looked over and the rod was folded over snagged up! After attempting to pop it loose from the snag I decided to just break my line but thankfully I use 30 lb Ande Monofilament Monster line and let me tell ya its freaking strong!! I tried everything to break it, maxxed out the drag, had 2 fingers and a thumb on the bail, trolling motor on max and ran from the back of the boat to the front pulling and just literally burnt the crap outta my fingers “It Wouldn’t BREAK!”

So I went back to the back of the boat and was about to just turn around and go get it, but I felt something that had me kinda just focus all my senses to the rod. I thought could there really be something on the end of this? So I reeled down and pulled up pretty hard a few times and just maybe I thought I might be gaining some line back. So I mentioned to my buddy, I said man I think I’m pulling this freakin log in! And it literally felt like I was dragging a tree on the bottom of the lake! No head shakes, no thrashing, wasn’t pulling any drag but probably because the drag was maxed out still! But yes I was definitely gaining some ground. So I just kept pulling this so called tree in and I get it to the back of the boat and almost to the surface and BAAAAAAM this thing takes off like a bat outta hell straight to the bottom max drag still engaged damaged line by this point i’m certain scared sh**less i’m gonna lose this fish right here right now Trying to hold onto the rod and loosen the drag as quickly as I can luckily it buried itself on the bottom of the lake again my eyes are literally about to explode outta my head as I turn to my friend and yelled holy S*** get the net its a freaking Monster! Regained composure slightly and this fight literally just started  but now I feel like this fish has the upper hand I had just ripped him outta his home, my line has got to be frail im shaking at this point mad nervous. I made some adjustments to the drag and slow played him. But luckily he just wanted to chill on the bottom and wasn’t running away from the boat and at this point we were not around any structure.

FINALLY  we were able to get him into the net THANKS TO CLAYTON DUNN! Hard to believe this was the short version of the story but I hope you enjoyed it because I’ll cherish this one for the rest of my life! Pics weren’t the best but you gotta have some type of proof to go along with a story like this one!

I do have to give credit to the rest of my equipment as well.  This time I was using a 9/0 reaper hook by Hookers Terminal Tackle along with my TWC EXT rod.

Update: After inspecting the line. Around 10′ away from the liter line there’s about a 6′ stretch of kinked/damaged and frayed line where he had me tangled in something! I will always use Ande Monster Monofilament!